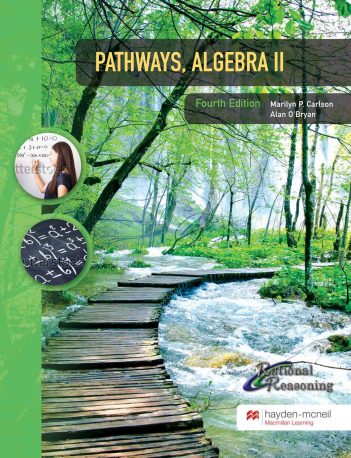 Students learn to view a sequence as a function relationship between term values and term positions. Students explore the long-term behavior of a sequence to build an initial understanding of limit, and then apply their understanding of linear functions to make sense of arithmetic sequences. Students then consider patterns formed by repeated multiplication (geometric sequences) as an introduction to exponential functions. Students also learn how to build a sequence of partial sums, find the sums of series, and represent series using sigma notation.

Students build on their understanding of discrete exponential functions (geometric sequences) and consider how to model continuous exponential growth, including how to determine partial growth factors or n-unit growth factors. Students then learn that a logarithmic function represents the same relationship as an exponential function but with the input and output quantities reversed. This leads to a general treatment of inverse functions and function composition at the end of the module.

Students begin the module by exploring the commonly seen “Box Problem” as a way to understand polynomial functions in context and to make connections between representations. Students then work to understand and explain changing rates of change for a function and to generalize characteristics of polynomial functions such as end behavior and repeated roots. Finally, students begin to study function transformations as a way of describing the relationships between two pairs of co-varying quantities

Students apply their previous work with the long-run behavior of polynomial functions to understand the long-run behavior of rational functions. Students also examine a function’s behavior as it gets closer and closer to some value(s) of the input variable that makes the function undefined in order to build a conceptual foundation for vertical asymptotes. Students end the module by learning how to solve rational equations by first finding common denominators for the expressions involved.

Students learn techniques for solving radical equations and how a solution process can generate extraneous solutions. Students explore the co-variational relationship indicated by radical functions and apply ideas about function transformations to this function family.

Students build meaning for the concept of angle measure and learn how to measure angles in a variety of units. Students then study circular motion and develop the sine, cosine, and tangent functions as representing important relationships that emerge during circular motion. Students continue to explore ideas of function domain, range, composition, inverse, and transformations in the context of trigonometric functions, and they end the module by exploring and verifying the Pythagorean Identity.

Students learn about probability as the long-term relative frequency for specific outcomes in the sample space of an event. Students consider conditional probability and the impact of dependency on the probability that an event occurs. At the end of the module students learn about how to count the number of events in larger more complicated sample spaces using the multiplication counting principle and permutations and combinations. They then use these techniques to help calculate the probability of certain events.

Students learn how to identify correlations between two measurements and examine the difference between correlation and causation. Once they identify a correlation, students model the correlation relationship with a regression line when appropriate. Students learn about residuals and how to use these values to choose between potential lines of best fit. They finish the module by comparing interpolation and extrapolation and the implications of using these processes to make predictions.